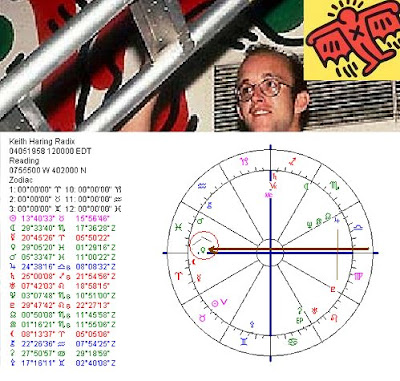 Popular pop artist Keith Haring was born May 4, 1958 in Reading PA with Venus at Aries Point, rising before the Sun and probably Moon trine Venus. That is part of the pattern of artistic talent. Because we don't know at what time he was born, we don't know all the rest of the pattern, unfortunately. But...there are minor aspects between Venus and Neptune (biquintile) and between Mercury and Venus (half semi sextile) and there is an inconjunction between Venus and Pluto. Aspects between Venus and Pluto are not uncommon in the world of arts and probably they reflect the inner battle between art and what sells best or maybe it just means 'the price you pay for love, fun and gain'. The inconjunction often symbolizes a problem with health. Keith Haring died of AIDS.
For more about Venus and Pluto in combination...

The Sun in Taurus (sign ruled by Venus, symbol of talents) is semi square Venus and does not make Ptolemaic aspects in orb 5 degrees. I name that a 'calling' Sun and it means that Keith Haring wanted to be in the centre of attention, as a star, performing or leading. One of the indications for fame is the opposition of Venus with the midpoint Jupiter/Pluto. The three planets together reflect the possibility of intense (Pluto) success (Pluto) in love and/or arts (Venus).
Gepost door Astromarkt op 09:15