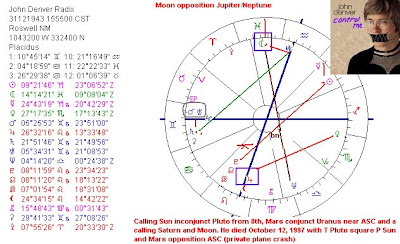 John Denver was a folk singer, playing the guitar. He was an artist and it is easy to see why:

The Moon in Pisces is connecting Midheaven and Venus. Artistic patterns consist of the relationship between Moon, Venus, Neptune and/or the sign that they dispose of with the Midheaven. All of the charts on this blog show such a pattern, in various ways.

Sun, Moon, Jupiter and Saturn are prominent in his chart. There was success but it was not easy to get and there were ups and downs.

John Denver drank too much alcohol. For addiction we see Sun square Neptune (vulnerability) and Moon in Pisces biquintile Pluto (a creative way to stick to habits). The same qualities (empathy, sensitivity) that lead to music, led to addiction...
(Notice the Sun-Pluto inconjunction reflecting the difficulties with his father and problems with self value and self control).