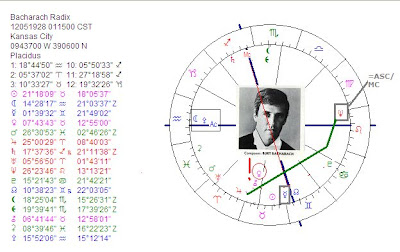 On this blog Art & Astrology I show you the patterns of artistic talents in the charts of various artists. This time the example is the chart of Burt Bacharach. The pattern in his chart is made by Venus in Taurus, rising before the Sun, without major aspects and final ruler of the Midheaven. It would almost have been enough, but there is more. So let us see the complete picture (above is his chart).

Musician and composer Burt Bacharach was born with Neptune related to ASC/MC, a 'calling' Venus in Taurus , final dispositor of the Midheaven and rising before the Sun. He also had the Moon angular (on the ASCendant). So, Venus, Neptune and Moon were prominent in his chart. Is that enough to show artistic talent in this chart, or should I add that there is 108 degrees between Venus and Neptune and that that is 1 quintile + 1 semi quintile? Or that Jupiter (ruler MC) is trine Neptune?

Burt Bacharach's artistic pattern is shown by the prominence of the planets that indicate the sense of artistic talents (Moon, Venus and Neptune). This is the chart of a man who goes for the beauty and style in life at any level (Venus) and who related this to his carreer (Midheaven). He also has a certain feeling for what people want to hear (Moon in Aquarius on the angle for being in the mood for what is new and modern) and he also has a crucial fantasy or vision (Neptune with ASC/MC). And look at the conjunction of Moon and Pallas for sense of patterns! Also important is the position of Mercury, the communicator.

Of course it takes success to be able to live of artistic talents. There are at least 10 midpoint combinations reflecting possible successes. Most important: Midheaven yod with Jupiter/Pluto (MC 180 JUP/PLU) and Jupiter related to the midpoint Sun/Moon.
Gepost door Astromarkt op 14:27