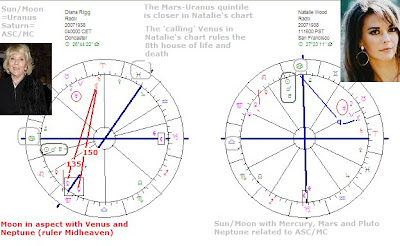 Natalie Wood and Diana Rigg were born on the same day: 20 July 1938, but at different moments and places. Both have patterns of artistic talents in their charts. The artistic pattern consists of related Moon, Venus, Neptune and Midheaven and/or the signs that Moon, Venus and Neptune rule.

The signs that are ruled by Moon, Venus and Neptune are Cancer, Taurus, Libra and Pisces.
Diana has a Cancer Ascendant and Pisces Midheaven with Sun in Cancer. Natalie has Libra Ascendant and Cancer Midheaven.

Both have Venus 'calling'. Diana's Moon is connected to Venus and ruler Midheaven, Neptune. Natalie's Moon is quintile Midheaven and Neptune is related to ASC/MC. Both have the Black Moon angular and Uranus oriental. They are/were controversial, 'apart', different from the rest. Diana does not want to be remembered for her role in 'The Revengers' but we cann't help it when we remember her for that in particular.

Diana is still alive. Natalie Wood died in November 1981. This blog is about patterns for artistic talents only, so I won't go into that...I just noticed that there is another significant indication for the career of the ladies. It is the Midheaven in Cancer or in Pisces. One of the meaning of both signs is 'to act as if', 'to pretend' and 'to seem to be'. And acting is one of the ways to do so.
Gepost door Astromarkt op 14:32