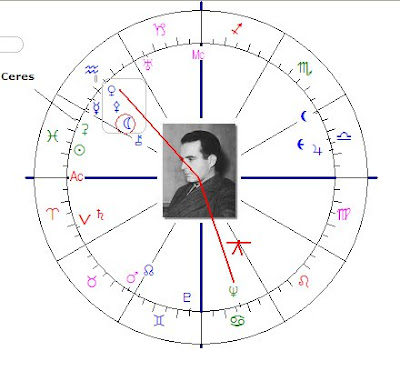 Samuel Barber, the man who composed 'Adagio for Strings',a very touching and popular work, wrote his mother that he wanted to be a composer when he was only 9 years old. It is a pity that his hour of birth is unavailable, but still, there is enough 'evidence' that the chart of 9 March 1910 is his.

PATTERN
The Moon is rising before the Sun and is in Aquarius, just like Venus is. Pallas is right in between Moon and Venus. Venus is inconjunct Neptune. Here you see part of the pattern of artistic talent. He was born on a day that indicated the possible birth of a person with artistical (Neptune) talent and sense of rhythm (Venus Aquarius) and feeling (Moon-Venus) for patterns (Pallas).

INFLUENCES WHEN YOUNG
That artistic talent came from his mother (a pianist). His aunt (contralto) was married to a composer. Watch Ceres, rising before the Sun. Ceres is the symbol of genes and (as I believe) of the 'big mother-figure', just like the Moon reflects education (the early years) and private (family) situations as seen in the eyes of the 'beholder'. The importance influence of family and genes is evident and translated in the chart as the importance of the symbols of family, genes and education in the early years (Moon and Ceres).

NO HOUR OF BIRTH
Little more is known about his chart, so let the music play and see the alternative interpretation of Adagio for Strings by DJ Tiësto on You Tube.

Here is the link to DJ Tiesto's Adagio for Strings on YouTube
Gepost door Astromarkt op 14:21