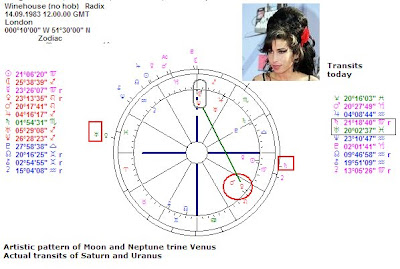 There is more news in the papers about her drugs addiction, but Amy Winehouse DOES have a beautiful and special voice and...the pattern of artistic talents in the positions on the day that she was born (14 September 1983, London). Such a pattern is composed by Moon, Venus and Neptune (and the related signs). As her hour of birth is unknown, the angular positions and the sign on Midheaven are a mystery, but...

We see Moon conjunct Neptune, both trine Venus. We see the passionate couple Venus and Mars rising before the Sun. This is the picture of a passionate person prepared to live to the max (60% of the positions in fire signs!) and at the same time vulnerable because of the sensitive nature. The half semi square between Jupiter and Neptune is for the theme of the devoted audience.

The combination of Sun quintile Jupiter and semi quintile Pluto gives her the confidence to be on stage and is the root of success. In the 5th harmonic the Sun is conjunct Jupiter and opposition Pluto. This does not explane her fame. Prominent position in her individual chart would probably reveal more.

Now that I write this (January 2009) transit Saturn is conjunct her Sun. Saturn is 'calling' in her chart (not making Ptolemaic aspects in sign), so this transit is more important for her than for other persons. The newspapers report that her parents (Saturn) are relieved that the treatment against her drug addiction seems to have worked and that Amy is clean now. Last year transit Uranus was oppositon her Sun. That caused upheavel about her behaviour. As Uranus is coming back to make the same kind of oppositions, it is to be expected that she will be in the papers and magazines and shock the public in 2009 as well.
Saturn and Uranus together introduce the theme of restricted freedom or breaking free. For more about that see Astropost.
Gepost door Astromarkt op 23:07