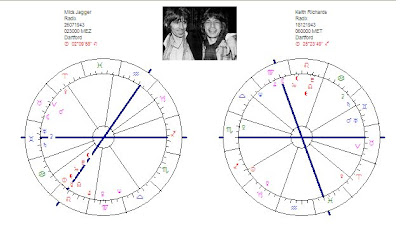 Keith Richards and Mick Jagger work together and they are friends. Mercury and Mars (work), Uranus (friendship) and Venus (sympathy) relate their charts:

Their composite chart for the given hours of birth (source is Astrodatabank) has Mars conjunct MC and Uranus elevated with Sun conjunct Venus. Friendship above all (and perhaps a flash light relationship): that is what Uranus shows us. Working together (Mars on MC) and liking each other (Sun-Venus).

MICK JAGGER
Mick Jagger's chart has all the ingredients for fame: Sun, Mercury, Jupiter and Pluto are opposition Midheaven and the Sun is final dispositor of the Midheaven (that is why he is the leader of the band, the performer). Venus (style, entertainment) is exactly square Midheaven on the crucial spot down under in the chart. The Moon in Taurus (the sign ruled by Venus) is semi square ASC/MC and Neptune (art) is square Sun/Moon. Venus is biquintile Midheaven, showing creative (biquintile) talent (Venus) related to the career.
Mick Jagger's Saturn is rising before the Sun. This means that he is ambitious.

KEITH
In spite of his wild reputation, the Moon on Midheaven in Virgo reflects the need for perfection in his job. The artistic talent is shown by the aspects of Moon conjunct Midheaven, sextile Venus (sense of art related to the career). Venus is semi quintile Neptune (conjunct Venus/Jupiter) for succes in arts and again: creative artistic talents.

CARLA BRUNI
Mick Jagger and Carla Bruni have been a famous couple for a while. See for the chart of that relationship my other blog Astropost.
Gepost door Astromarkt op 05:27