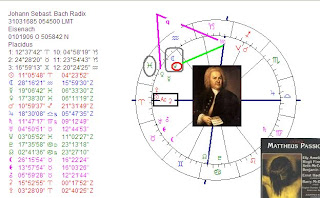 Composer Johann Sebastian Bach is very popular in March and April of every year, when the Mattheus Passion is performed in many theaters and churches. The artistic pattern in his chart has the same ingredients as those of the other artists on this blog:

1. Venus in the artistic and empathic sign Pisces
2. Moon conjunct Neptune for sense of art
3. Neptune in the sign of Neptune (Pisces) is the first outer planet rising before the Sun for ideals, visions and fantasy before all the rest
4. Venus is quintile Midheaven (for creative talent related to the career)
5. Distance Venus-Neptune is 15 degrees
6. Venus half semi square ASC/MC
7. Venus inconjunct Jupiter and trine Pluto (Jupiter square Pluto); the combination Venus-Jupiter-Pluto means great success in entertainment or art. Venus is also related to Jupiter/MC and to Pluto/MC.
8. Mercury conjunct Venus combines communications with style
9. Midheaven trine Uranus (and quintile Venus)...Venus and Uranus together show sense of rhythm. The combination is frequent in the charts of singers and musicians.
10. The crucial Sun on Ascendant rules the 5th house in the equal house chart. The 5th hous is the house of games, plays and entertainment.
11. I count more than 15 midpoint combinations with Jupiter (success indicators).
12. Ruler MC Saturn would be in the 5th equal house (and is in the Placidus 6th).

And then there is Sun inconjunct Saturn ruler Midheaven and that reminds me that I must mention that he died poor and that his wife and children in very poor conditions. It took the world 75 years to recongnize the value of his works. There was success in art (Venus-Jupiter), but...it was Venus INCONJUNCT Jupiter. Sadly.

About the effect of the inconjunction, see http://astropost.blogspot.com/2009/01/effect-of-inconjunction.html
Gepost door Astromarkt op 14:21