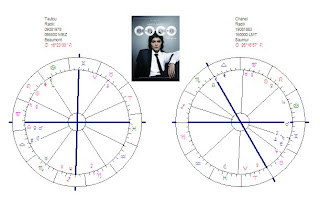 When an actor plays the role of a famous person, often there is a sort of a connection between the chart of the actor and of the impersonated person. Audrey Tautou will act as Coco Chanel and we see Coco's Neptune (inspiration, spirit) trine the Ascendant of Tautou who will present herself (Ascendant) as the image (Neptune) of Coco.

Audrey Tautou has a few prominent placements in her chart that give us an impression of her artistic talents:

1. Venus is in Libra
2. Venus is opposition Aries Point
3. Venus is 15 degrees away from Moon
4. Moon is sextile Neptune
5. Moon is in Libra
6. Neptune is square Sun/Moon
7. Neptune is at a crucial spot (down under in the chart)
8. Midheaven and Pluto are in aspect with Venus/Jupiter (great success and profit with a carreer related to entertainment)

Coco Chanel had other kind of talents. She was able to lead a company. She started her career with an affair with a very rich man, while working at a tailoring shop. Maybe that is why Mars (men) is crucial in her chart? Another important planet is Jupiter. Jupiter is the first outer planet rising before the Sun. And last but not least there is Pluto. Pluto does not make major aspects in sign or orb 5 degrees. That makes Pluto important, the 'calling' planet. We see Mars, Jupiter and Pluto prominently placed in her chart. The combination of Mars, Jupiter and PLuto is an indication for a lot of energy and enterprise and a sign for success. Besides:

1. Moon is in Pisces for sense for 'la mode', fashion
2. Venus is square Neptune for artistic talents
3. Libra is on Midheaven for a career related to style and diplomacy
4. Uranus and Pluto are related to ASC/MC, signifying crucial and dramatic changes in life
5. Pluto is related to Sun/Moon and Pluto is in the 5th house of creations and fun
6. Jupiter is exactly conjunct Mercury/Pluto, for successful communications
7. Mars is exactly conjunct Jupiter/Pluto, confirming the crucial placements of Mars, Jupiter and Pluto (for successful enterpreneur)

There is one important thing in this chart that points at fashion (or any other branche related to the basic needs of menkind, like clothes, food, having someone to take care of you as a child and edcution). And that is the Moon.
The Moon is the first planet that will be 'hit' by the Ascendant on the day of birth. The Moon is standing apart from the other positions in the chart.

PS The Black Moon is on the Midheaven. Funny that Lilith is the mythical 'runaway bride' of Adam and that she never married.
Gepost door Astromarkt op 08:16