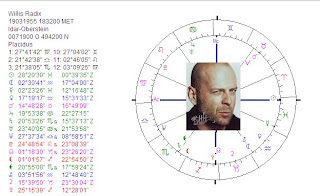 Bruce Willis was born 19 March 1955 at 18h32 in Idar-Oberstein, says Astrotheme (and I noticed the same hour on Astrodatabank). His natal chart contains many indications for fame, the astrological pattern for artistic talents and indications for being an idol. How? Like this:

A
The most important positions are for the Sun (on the Descendant) and Mercury (rising before the Sun and not making aspects in sign, disposing of the Midheaven and related to Sun/Moon). This shows us that he is drawing attention (performing or leading) and that communications are vital. The midpoint ASC/MC is aspected by Sun and Jupiter (for success).
B.
The Moon is biquintile Neptune and 15 degrees from Venus. Neptune is trine Midheaven and links the career to empathy and fantasy. There is the artistic pattern.
C.
Mars is semi square Aries Point. Mars's influence adds the importance of muscles.
D.
I count over 20 midpoint combinations with Jupiter involved. These are indications for successes, like for example MC semis quare Mercury/Jupiter and Pluto semi square Jupiter/MC and square Sun/Jupiter.
E.
Sun inconjunct Neptune is reflecting the actor (who is often taken for the role that he is playing instead of the real Bruce; he is an idol). For more about Sun-Neptune see my site Astromarkt.

BIRTHDAY (AND WEDDING DAY?)
It seems that Bruce, who's 54th birthday it is today, is about to get married for the second time. Monday, Jupiter is conjunct Venus (perfect moment for a party) and Saturn inconjunct Venus (for disproportional cold feet). So probably it will be a nice party with something going wrong. But, as Jupiter is opposition progressed Midheaven and Mercury trine progressed Jupiter, I bet that the benefits are greater. On the 21st of March Tertiary Sun will be trine Jupiter for a great day, too. So whatever sort of a party it may be, it will be a 90% nice weekend.