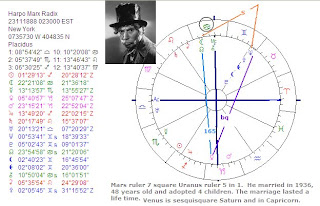 The chart of Harpo Marx shows that he is an artist in a rather peculiar way, just as peculiar as his role was. Three minor aspects (septile, quintile and quindecile) connect Venus and Neptune with the Moon, final dispositor of the Cancer Midheaven. Venus is on a crucial spot in the chart (down under), without making Ptolemaic aspects. That makes Venus (symbol of talents) important for the vocation.

SILENCE
I remember Harpo Marx as the silent (somewhat irritating) Marx Brother and so I am not surprised to see his Sun opposition Neptune/Pluto, the combination of the silent force. And how intruiging that Mercury (semi square), Uranus (half semi square) and Pluto (112.5d) are in aspect with the important midpoint Sun/Moon, reflecting 'being very controversial and radical in communications'! Another way to read this combination is that he had a very irritable way to communicate:) LOL!

Harpo is the only Marx Brother who managed to stay married the first time. But...he married late and maybe that is the secret:).
Gepost door Astromarkt op 09:33