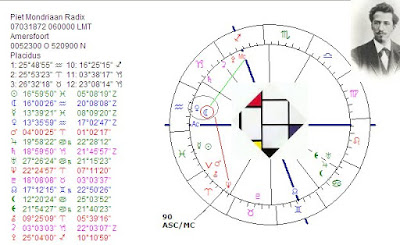 Piet Mondriaan was a painter. He used primary colours, squares and lines and was very modern in his days. Art (and art in a special way) was born to him, according to his natal chart. These are the 7 indications:

1. Neptune square Ascendant/Midheaven (art is crucial)
2. Conjunction of Moon and Venus in Aquarius (for sense of avant garde art)
3. Moon and Venus in aspect with Midheaven (relating sense of art and style to the career)
4. Dispositor Midheaven is Jupiter and Jupiter is in the 5th house of creativity
5. Moon connects Neptune, too (by a 67.5 degree minor aspect of semi square + half semi square)
6. Uranus (symbol of 'being different' and of rebellion) is not making Ptolemaic (major) aspects. That is what I name a 'calling' Uranus, indicating that he was 'called' to be avant garde.
7. The Moon rises before the Sun, conjunct Venus. Sense of style and first of all sense of what people need (fashion).

Just like in the charts of the other artists on Art&Astrology you see the link between Moon, Venus and Neptune with Midheaven.
Gepost door Astromarkt op 07:02