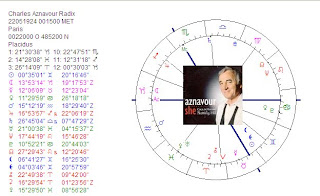 Charles Aznavour is a singer and an actor, but since February 12, 2009 he is also an ambassador. At age 84 Armenia asked him to be the ambassador in Switzerland, a mostly ceremonial function. Armenia is independant (again) since 1991. From 1920 to 1991 it was a (conquered) USSR Republic.

Uranus is the first outer planet rising before his natal Sun (followed by the important dwarf Ceres, the symbol of the 'roots'*). In my (Dutch) book Astro I.D. I give several examples of the effect of the oriental Uranus. Often this indicates a peculiarity or specialty, like for example getting very old. Pope Benedict has Uranus oriental, too, by the way. Aznavour's Uranus is right in the middle of Sun and Moon. Sun, Moon and Uranus are in hard aspect with the crucial midpoint ASC/MC (the crosspoint of time and place of birth), in the 22.5 degree range. This tells us that these three (Sun, Moon and Uranus) are of crucial importance for the development of Aznavour. He is in heart and soul an outsider, different, peculiar, special and adventurous.

Saturn is on top of Aznavour's chart and that is most often reflecting conservatism, the classical way or ...ambition and administration. It also tells us that the influence of the parents is substantial. His parents were artists.
Saturn is 'calling' (not making Ptolemaic aspects in sign or orb 5 degrees), too (just like in the chart of the pope).

Aznavour is not a pope, but an entertainer (songwriter, acotr and public activist). He has no major aspect with the Sun (Sun is 'calling') and that reflects leadership or performance (drawing attention) at any possible level. Entertainment is a good way to draw attention and to be in the center of the public eye.

The importance of Saturn and Uranus might refer to the fact that his parents fled the masacre in their homeland Albania in 1915.

He was discovered by Edith Piaf in 1946 (progressed Sun square the important Uranus!). He wsa noted in the newspapers (and had the first critics, too) in 1950, with Moon and Midheaven conjunct Jupiter. From 1956 he was a 'vedette'. At that time in his life, the progressed Sun had changed sign and the progressed Moon was square Jupiter, Mercury opposition Jupiter.

*) Charles Aznavour was born in a family of artist.
Gepost door Astromarkt op 12:21