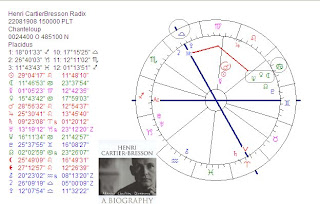 Henri Cartier Bresson was a famous photographer in the 20th century. He was born 22nd August at 15:00 hours in Chanteloup with the pattern of artistic talent in his chart. He also sketched and painted. No wonder that Moon, Venus and Neptune were close together in Cancer, square the Midheaven in Libra. He died August 3, 2004. He is considered to be the master of modern photo journalism and is one of the founders of Magnum, a cooperative picture agency. He maried a Javanese dancer and travelled all over the world. Not surprising is that Jupiter, symbol of the international, is conjunct his natal Sun and that Sagittarius is the Ascendant, with Sun in the 9th equal house.

Mars is semi square Uranus. The midpoint Sun/Moon is connected with Mars and Uranus for using new techniques. And perhaps for a hot temper? I thought. I didn't find it on Wikipedia, but www.bookenthousiast.com mentions a biography and the hot temper that the writer of it mentions.
Using techniques or modern electronical tools is part of being a photographer. Anthony Armstrong Jones (another example on this blog) has Mars in mutual reception with Uranus and they are the final dispositors of the Midheaven routing (Sagittarius, Jupiter in Gemini, Mercury in Aquarius, Uranus in Aries <> Mars in Aquarius).
Gepost door Astromarkt op 08:26