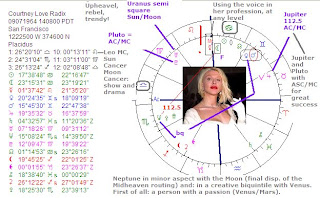 There is artistic talent in the chart*) of Courtney Love. Here is the chart with the indications:

- final dispositor of the Midheaven routing (Leo, Sun in Cancer, Moon in Cancer) is the Moon in Cancer.
- Moon is 112.5 degrees from Neptune (square + half semi square)
- Venus is biquintile Neptune, reflecting creative artistic talents.

So the final dispositor of Midheaven is in contact with Neptune and Neptune with Venus and there is a creative aspect between the symbols of talent and arts.

Courtney Love is above all 'an act' and an actor (Moon in Cancer elevated), using her voice at any level of communication (Mercury).
Watch the position of Mars (the first outer planet rising before the Sun) for instruments (hitting them) and you notice the guitar player.
Another interesting observation: the Sun in the 18th degree of Cancer sextile Jupiter in the 20th degree of Taurus and trine Neptune in the 16th degree of Scorpio with Jupiter opposition Neptune. The Jupiter-Neptune combination refers to fans and followers and a 'devoted or believing' empathic audience (like in the movies).

Courtney sings, plays the guitar ánd is an actor. She is rather controversial (or trendy) with Uranus related to Sun/Moon (for the reigning need to be different:). And a big success. Jupiter and Pluto are in hard aspect with the midpoint Ascendant/Midheaven, the cross point of the chart to reflect that.

PS About the situation in 2009 (Courtney Love and her diet) see
http://astropost.blogspot.com/2009/06/saturn-ceres-and-skinny-courtney-love.html
Gepost door Astromarkt op 10:51