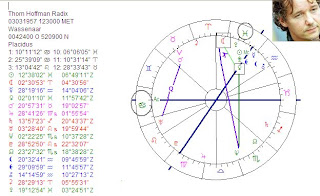 Thom Hoffman is an actor and a photographer. Just like the other photographers (Anthony Armstrong Jones and Henri Cartier Bresson, click the label 'photographers' to see their charts) he has an aspect between Mars and Uranus (a creative quintile in this case) for using flashes. Uranus is the symbol of flashlight and electricity.

He has the pattern of artistic talent in his chart like this:

In other words: Neptune (dispositor of the Pisces MC) is connected with the Moon and Venus. This is reflecting sense of art,style and beauty with artistical talent related to a profession or to the public function. And with Venus sesquisquare Jupiter/Neptune he will have fans and followers.
Gepost door Astromarkt op 08:33