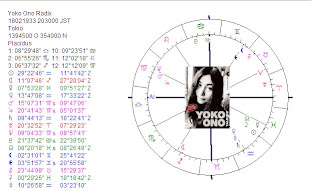 Yoko Ono is an artist. We can see that by her chart. An astrological artistic pattern consists of aspects and other relations between Moon, Venus and Neptune (and the signs that belong to them) with Midheaven. In the chart of Yoko Ono Cancer is on the Midheaven and the Moon in Sagittarius is square Neptune and sextile Venus. Neptune is sextile MC. Also Venus is half semi square Sun/Moon. It is a complete pattern that reflects sense of art and style.

Venus is 67.5 (sesquisemisquare) Uranus, so that both Venus and Uranus are in aspect with Sun/Moon in the 22.5 degree range. The Venus-Uranus connection is rather common in the charts of pop musicians*) as rhythm is an important component of modern music.