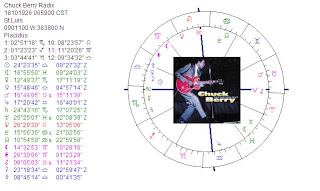 Chuck Berry is a guitar player, a singer and a songwriter, but he is also a jailbird. He was convicted 3 times. He also has 3 midpoint combinations of Sun, Saturn and Uranus in his natal chart. This combination reflects the issue of limited freedom. Also notice the Sun in 12 semi sextile Saturn.

But let's talk about rock and roll and the astrogical artistic pattern*). It is in this chart:

1. Moon in Pisces
2. Venus in Libra
3. Venus final dispositor of the Midheaven routing
4. Moon inconjunct Venus
5. Neptune half semi square ASC/MC
6. Neptune the first outer planet rising before the Sun
7. Moon in the fifth house of creativity
8. Neptune is in the 10th house of profession

For the very tight square between Venus and Pluto I recommend my site Astromarkt, about Venus-Pluto (the beauty and the beast). Venus and Pluto together are the money-axis (earning money, financial problems or desire) and a tight aspect shows the importance of this subject.

*) All of the charts of artists on this blog have connections (aspects) between Moon, Venus and Neptune and/or the related signs (Cancer, Taurus, Libra and Pisces) with Midheaven - MC -. Moon, Venus and Neptune contribute to artistic talents, sense of style and arts. The Midheaven or 10th house adds professional use of these talents. For creativity (games, play and show) there is also often involvement of the 5th house.
Gepost door Astromarkt op 10:49