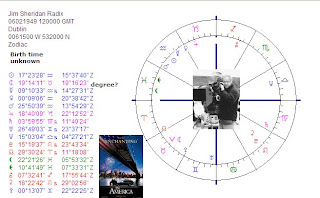 After seeing 'In America' (a beautiful tear jerker) I got interested in the chart of the director, Jim Sheridan. He was born February 6, 1949 in Dublin. I couldn't find an hour of birth, so I had to see the pattern of artistic talent in the positions of the day of birth.

Here it is:
1. The Moon is in the artistic sign of Taurus
2. Venus doesn't make Ptolemaic aspects in sign or orb 5 degrees'(Venus is 'calling' and that means that there is a vocation for style and arts or entertainment at any level)
3. Mercury is also 'calling': communications are important
4. Venus is 105 degrees from Neptune: focus on arts
5. Venus square Jupiter/Pluto (success in art)

He is a director, because:
1. Jupiter is the first outer planet rising before the Sun. Jupiter is the planet of the international (and he emigrated to New York, like the main character in the movie:). But Jupiter is also the planet of guidance.
2. Another reason for directing: Saturn! Saturn is 'calling' (making no major aspects). That is an indication for ambition, administration, business and management.

When 'In America' was realesed, progressed Uranus was conjunct the natal Uranus. That is because Uranus was retrograding in his natal chart and started going direct. In 2002 Uranus had returned to the natal position. Perhaps from that moment on 'new life' in New York started for Jim Sheridan, too.

Another observation: he lacks placements in water signs. That is an indication for 'sentiments' at any level (for a person who usually will be rather cool). His movie has that effect...Emotions at any level, moving you, even if you resist:)
Gepost door Astromarkt op 07:53