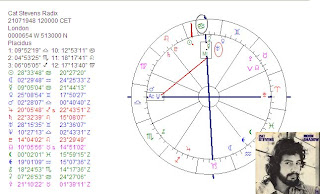 Yousouf Islam (Cat Stevens) is an artist. The talent is obvious in his chart:

1. Neptune is conjunct Ascendant for prominent sensitivity
2. Cancer is the sign of the Midheaven and Cancer is one of the signs in the artistic pattern
3. Neptune is square Midheaven, relating the career to the 'amorphous' (like arts, movies, religion)
4. The Sun is 'calling' in the tenth house for drawing public attention at any kind of level
5. Venus is conjunct Uranus for sense of rhythm
6. Neptune is semi square ASC/MC for the crucial importance of arts (and spirituality)
7. Last but not least: Mercury is conjunct Midheaven for the crucial importance of communications (the voice/songwriting) for the career.


PATTERN OF TALENT
(added in 2013)
Cat Stevens doesn't have the usual pattern of artistic talent (aspects between Moon, Venus, Neptune related to Midheaven) at first sight. However: his angular Neptune square MC is an important planet for artist and in religion or in any other field that requires empathy, belief, fantasy or vision. This Neptune is in minor aspect with the Moon (112.5 degrees, a square and half semi square) and with Venus (105 degrees, a squine, see http://tribes.tribe.net/astrologynow/thread/8ec4be5d-d204-4859-9dba-e33222d224d4 ).


Also notice that Venus is 112.5 d from Jupiter/Pluto, for succesful entertainment.

What more information does an astrologer need? The Mercury-Neptune square on the angles refers to 'telling tales'. He is a poet. Mercury is in Cancer and Neptune is in Libra. The dispositors of Cancer and Libra are Moon and Venus. The square between Mercury and Neptune can be read as telling tales in an artistic way, because Cancer and Libra (as Moon and Venus) are the combination of sense of arts, style and beauty.

CONVERSION: Uranus in the 9th house
Cat Stevens was born with the name Steven Demetre Georgiou (a Greek Cypriot name). In the 70'ies Cat Stevens had a quest for spiritual truth, including the study of astrology. For this: see Moon in Aquarius in the 3rd degree of Aquarius, close to Algiedi, biquintile Uranus and the Midheaven semi square Jupiter/Uranus.
In the end of this quest he converted to Islam. Since then there were a lot of controversies (see Wikipedia). Note the placement of Uranus (planet of reverse, conversion and controversy) in the ninth house (the house of conviction). Uranus is the first outer planet rising before his Sun. This reflects rebellion, controversy and being 'different' from the rest. Uranus is semi sextile Sun and 15d from Midheaven. The fact that he drew the attention of the public (Sun and Midheaven) attributed to the upheavel, of course.

CHANGE OF (ARTIST) NAME
With Neptune on the Ascendant the use of an artist name doesn't come as a surprise. Neptune is the symbol of 'hidden things' and of fantasy, too. The presentation or name (Ascendant) goes together with (conjunction) fantasy (Neptune)...The name of his wife is not known. Maybe that can also be contributed to Neptune (keeping things a secret, discretion).

When he became a muslim, he altered his artist name in Yousouf Islam. That was with the progressed Ascendant (symbol of presentations and nicknames or names) changed sign. When the Sun, the Ascendant or the Midheaven change sign in progression, vital changes in life are to be expected, like when a new 'Morning has broken'.