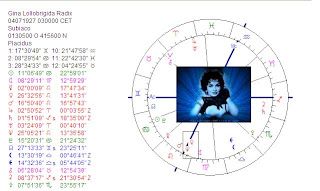 Gina Lollobrigida (La Lollo) is a famous Italian movie star. In the last months of 2006 she was in the news because of a plan to get married to a 45-year old Spanyard (she was almost 80 then). But the marriage was delayed.

With her Gemini Ascendant Gina Lollobrigida remained 'young' for long. Jupiter conjunct Uranus, elevated, promissed her sudden successes and made her inventive. Venus and Neptune are biquintile Jupiter and Uranus. The (bi)quintile is a creative aspect. Venus and Neptune together reflect artistic talents and sensitivity. They are also the components of a romantic nature. The two planets are opposition the Midheaven. The Moon (acting, attracting) is quindecile Midheaven and positioned at the lowest spot of the chart, in a crucial position.

Gina Lollobrigida (born 4th July 1927 Subiaco at about 3 o'clock at night. End of 2006 progressed Venus was sextile Sun. The sextile is the harmonious aspect of 'letting go' and 'acceptance'. Transit Saturn was conjunct progressed Ascendant and approaching to Venus. That is more the reflection of love ending than of a mariage. Anyway, she did not marry the man after all.