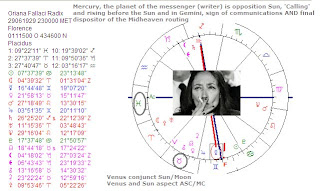 Oriana Fallaci was a writer and a journalist. She was more a publisher and a journalist than a poetic writer. That is why the planet of the messenger and the facts, Mercury, is very prominent in her chart (more than the astrological pattern of artistic talents).

Mercury, the symbol of communications is:
1. Opposition Midheaven
2. Strong in Gemini
3. Rising before the Sun
4. Not making aspects in sign or orb 5 degrees ('calling')
That is why Mercury is the most prominent planet in her chart.

The artistic talent (or should I say her style and empathy) is reflected by the position of:
1. Venus in Taurus,
2. Venus conjunct Sun/Moon and
3. Venus in aspect with ASC/MC
4. Moon biquintile Neptune
5. Moon 105 degrees from Midheaven

Her father fought against the facist regime of Benito Muselini. During WWII she had progressed Sun conjunct Pluto. Her life was in danger, too, because she helped him. When she was 16, with Progressed Sun sextile Venus, she started writing. But the experiences during the war made her active and alert against any sort of decay in liberty. (Sun square Uranus) Later in life the same aspect made her rather controversial. After 0911 she started writing against islam and the sharia.

She was a heavy smoker, just like Obama (Has he quit smoking yet?)
In his chart the signs for smoking are: Neptune on top, square Mars with Moon square Pluto. In her chart the Pisces Ascendant and Mars conjunt Neptune might be blamed.
Gepost door Astromarkt op 11:19