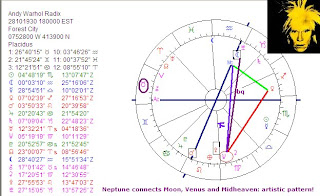 Uranus is the planet of controversy and extravagance. Mercury is the planet of communications. These planet don't make major aspects, so that he could become a newsmaker at any level, in spite of being shy.
The Moon, Uranus and Neptune are part of a so called 'golden Yod'. He had a typical behaviour and typical desires. That was his strength and it was his weakness.
Gepost door Astromarkt op 19:13