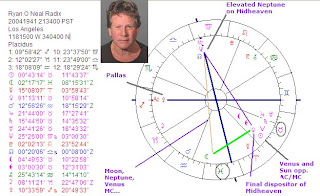 Ryan O Neal was born on April 20, 1941 at 21h34 PST in LA with a Taurus Sun and Moon in Pisces, exactly inconjunct Pluto and sextile Venus. You immediately notice the difficult habits (see the post about Moon inconjunct Pluto). This blog is about the astrological pattern of artistic talents, so let us find the actor in his chart*). It doesn't take long, because it is so obvious.

Neptune is conjunct Midheaven.
Neptune is biquintile Venus.
Neptune is 157.5 degrees (sesquisquare + half semisquare) from Moon

That is enough for a complete pattern of artistic talent, already. Moon, Venus, MC and Neptune are connected! But there is more...

There is a need to 'hide or run' into fantasy or dreams and a good sense of what is valuable and nice. Also, the career is related to entertainment (Venus). Still there are more indications:
- The Sun is opposition AC/MC and that is a perfect position for a star, for wanting to be in the center of attention, for taking the 'lead'.
- Venus is also opposition AC/MC. This midpoint yod points at the crucial importance of beauty and charm.
- Pluto is square AC/MC and that shows the importance of money, influence, strength,

Sun and Venus are square Pluto, reflecting a difficult or challenging love life. The tightest aspect in the natal chart of Ryan O'Neal is Moon inconjunct Pluto and that apparently causes the personal problems and difficult behaviour. But let's stay on topic and get back to the artist: watch Pallas on the Ascendant. There are many more examples of people working in the business of entertainment and art with an angular Pallas in their chart. 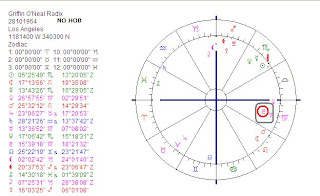 Larry King had an interview with Griffin, O'Neal's son about Ryan. Now the world is certain that they don't like each other. The interview came after the funeral of Farrah Fawcett, who also has an affliction between Mars and Saturn in her chart. (Griffin's mother died 10 years ago). I think that when men are sharing a hard aspect between Mars and Saturn it may be the kind of relationship that includes hitting hard and getting hurt. Ryan and Griffin share a hard aspect with Mars and Saturn that is perhaps the key. Their lives are joined by this issue.

Griffin is also an actor. Here you see the chart of his birthday (no hour of birth available). The complex aspects with Mercury and the unaspected Sun (for drawing attention anyhow) are perhaps good tools in the hands of an actor, but the affliction of Mercury with Moon and Neptune complicates fact finding and communications in general. See the post about Mercury's effect...

If you want to know more about the match of Ryan O'Neal with his late ex-wife Farrah Fawcett, see Astrology-love-romance.blogspot.com and the post with the same date as today.

For the effect of Moon inconjunct Pluto, click here...
http://astropost.blogspot.com/2009/04/effect-of-moon-inconjunct-pluto.html

*)PS to explain:
The pattern of artistic talent is made by aspects between Moon, Venus, Neptune and Midheaven, the special positions of Moon, Venus or Neptune and the signs that they rule.
Gepost door Astromarkt op 03:53