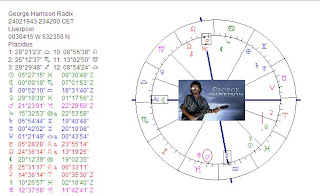 George Harrison was a famous musician and my favorite Beatle when I was 15. He played the guitar (notice that Mars is the first outer planet rising before the Sun, symbolizing the use of instruments and tools). He also sang on the background mostly (see Mercury - symbol of the voice - on the lowest spot in the chart, the IC).

PATTERN
The astrological pattern of artistic talent is obvious in this chart. George Harrison had a Moon in the first degree of Scorpio, inconjunct the Pisces Venus on Aries Point and semi sextile Neptune in the second degree of Libra, opposition Venus (out of sign). Venus is in mutual reception with Neptune at the end of the vocational routing through the MC.
It is a keen pattern of artistic talent (MC related Venus <> Neptune inconjunct Moon) with Venus as an important player on Aries Point, without major aspects in sing. Venus is the symbol of taste, style and sense of beauty. The position of Neptune square Sun/Moon shows that he was motivated by arts and music. And the angular Moon on the Ascendant contributed to his popularity.

DEATH
There are several indications for illnesses in his chart and there is an unfortunate conjunction of the rulers of the Ascendant and the eight house of life and death with the fixed star Scheat.

Three inconjunctions and a semi sextile tell us about possible illnesses (inconjuntions refer to something without balance from the start). His Sun in Pisces (ruled by Neptune) is square Saturn and that is another indication for illnesses (Saturn-Neptune).

With Saturn opposition Ascendant in the progressed chart he became a patient. When he died in November 2001, the progressed chart had Mars, the ruler of the IC (symbol of life ending) inconjunt Pluto in the eight house of life and death. This aspect combination refers to or activated the Mars-Pluto quindecile in the natal chart with Pluto (the symbol of transformation) on Midheaven.

As I mentioned before: Venus is the most important planet in this chart. Venus is on Aries Point, 'calling!' and ruling the Ascendant. It is a statement for pleasure and entertainment, for style and luxury, too. Unfortunately the important Venus is conjunct the fixed star Scheat and ...Venus also rules the eight house of life and death. Perhaps this attributed to his early death. RIP
Gepost door Astromarkt op 10:39